Making Friends, by Kristen Gudsnuk, is an all-ages comic book about a young girl who’s struggling with the transition from grade school to Jr. High – and with having unexpectedly acquired magic powers! Will she use her new abilities responsibly? Well, we wouldn’t have much of a story if she did!

Danielle (Dany) has just started Jr. High and it’s terrible! Her grade school friends are all in different classes, she has no one to eat lunch with and one of the boys in her class has started bullying her. Dany hasn’t had to make new friends since kindergarten and she has no idea how to go about it. It doesn’t help that she’s kind of nerdy and not as fashionable as the other girls in her class. Then, when Dany’s Great-Aunt passes away, she discovers a magic sketch book amongst her Aunt’s old things that manifests anything she draws in it’s pages into the real world, including: piles of money, a magic ring that lets her fly and the disembodied head of Prince Neptune, the dreamy and totally misunderstood villain from her favourite cartoon show (this last one was an accident). All of this, including her psychic, and possibly still evil, floating-head boyfriend, is amazing – but she’s still not popular and has no one to hang out with at school. But, thanks to the magic sketchbook, that’s an easy problem to fix. Dany creates Madison: a girl who’s outgoing, who knows all about makeup and fashion and who thinks Dany’s wonderful. Madison is the perfect friend; she and Dany get along great and start doing everything together. She protects Dany from her bully and even helps her to get to know some of their classmates. There’s only one problem, Madison doesn’t know that she’s not real and Dany has no idea what will happen when she finds out the truth. 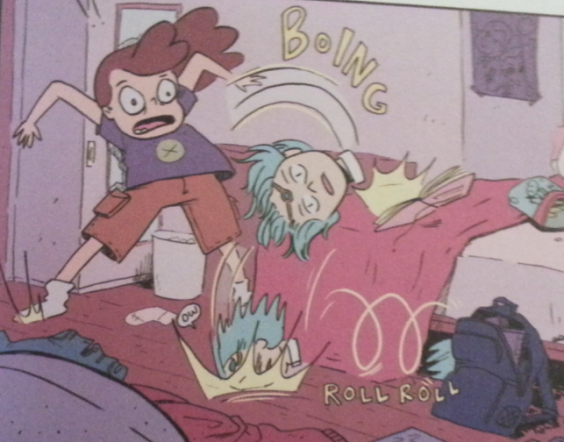 I can’t think of the last time I read a comic that I found so relatable! I went through an experience similar to Dany’s as a kid after my family moved to a new city. I didn’t know anyone at school and I had no idea how to go about making new friends. I wound up alone and was bullied, just like Dany, and I think I would have magically created a best friend if I’d had the ability to do it. So, Dany’s awkwardness and desperation felt very real to me, I’ve been there and remember how crushing that isolation was. On a more superficial level, there were also a lot of pop culture parodied in this comic that were things that I loved when I was a kid. The Solar Sisters cartoon is clearly meant to be analogous to Sailor Moon and Morphimals, the book series that Dany’s reading, looks like a reference to Animorphs. There’s enough 90’s stuff being referenced here that I was getting very nostalgic while reading, despite the fact that this comic came out in 2018.

In addition to being personally relatable to me, this is a very well written story. I was particularly impressed with how much depth Making Friends gave to Madison and the existential crisis she experiences when she eventually discovers that she was created by Dany’s magic sketchbook. Not only is she upset by the thought that she isn’t a real person, she has to struggle with the knowledge that the way she feels about Dany might not be genuine and could just be what the magic is forcing her to feel. She was designed specifically to be Dany’s friend, after all, so how can she know if she truly likes her? Madison decides to distance herself from Dany for a while, so that she can figure out who she is on her own and determine if she even wants to be friends with Dany. This process takes time but, as she hangs out with other people and tries new things, Madison is able to work things through and regain her confidence in her own sense of self. She even finds herself a family, not through magic like Dany offers to do for her, but by being placed with foster parents and becoming a part of their family.

Meanwhile, Dany is on a journey of her own and starting to face the fact that a lot of her problems are a result of her own immature and short-sighted actions, and not just what’s going on with Madison, either. Dany begins to realize that she and her friends were very cliquey when they were in grade school and that she had actually been kind of mean at times. If she’d behaved differently then, maybe she’d have more friends now and wouldn’t be in this predicament. This was a hard lesson in consequences, but a valuable one. I also enjoyed watching Dany become disenchanted with Prince Neptune over the course of the book. Turns out, bad boys aren’t as appealing in real life as they are in fiction and Prince Neptune is much less “misunderstood” than Dany had fantasized. His obsession with her had seemed romantic and flattering to Dany when she first accidently created him, but as he grows jealous of her friendship with Madison, it becomes increasingly clear that his feelings aren’t healthy. This all culminates in an epic showdown, which I won’t spoil here, but, suffice it to say, if you were a fan of Sailor Moon as a kid, then you’ll probably love it.

Making Friends is a fun and cleverly written book that deals with a lot of topics that will be relatable to tweens and young teens: the difficulties of making, and keeping, friends, of struggling with your identity and recognizing the need to be true to yourself. Dany has to learn the hard way that magic isn’t going to solve all her problems and that the only way to make real friends is to behave authentically and hope that people will like you for you. Making Friends delivers this message deftly and with a mix of humor, drama and excitement, making for a truly delightful read.

For more information on this series, visit Scholastic’s website: https://shop.scholastic.com/parent-ecommerce/books/making-friends-1-9781338139211.html

What did you think of this comic? Did you catch any 90’s references that I missed? Let me know in the comments. Also, be sure to check out my reviews of some of Kristen Gudsnuk’s other works:

You can also check out some of my other all-ages comics reviews: