Cosmo Familia, by Hanokage, the artist of the manga adaptation of Puella Magi Madoka Magica, is a fantasy manga with a very similar feel to that classic series. This comic features a bevy of cute girls and cartoony animals getting up to magical hijinks, all while an air of darkness hangs over their escapades.

Alice used to have a normal and peaceful life. Up until she was 10 years old, she lived happily with her mother, their maid, Imori-san, and their pets, the mysterious and adorable aliens known as cosmofs. But one day, her mother and Imori-san disappeared and the cosmofs began a relentless search for them, leaving a swath of destruction in their wake. While Alice managed to keep the cosmofs from wrecking her house and from causing too much damage to the nearby town, she’s spent the past 6 years of her life ostracized by the rest of the world, which blames her mother for the massive amounts of property damage caused by the cosmofs. Then, on her sixteenth birthday, Alice is approached by members of the Intergalactic Police Force with a surprising proposal, they will take her in and provide for her every need if she join forces with them and uses her abilities to eradicate all of the cosmofs on earth! Can Alice really help to destroy the creatures that she once considered to be family? And what caused her mother to disappear all of those years ago? Alice is about embark on a journey to discover the truth about her family, her past and the strange beings known as cosmofs, but she might not be ready for the answers that she finds.

For being such destructive pests, the cosmofs sure are cute! They’re such a motley array of round and cuddly looking creatures, it seems like Alice is fighting a horde of stuffed animals when she tries to get them to stop chewing up her roof. Cosmo Familia’s overall aesthetic is very whimsical; on top of the monsters that look like they wandered out of a Build A Bear, Alice looks as sweet as a cinnamon role, even when she’d using her fighting skills to dispatch the cosmofs that get out of hand. The other girls all have appealing designs as well, and I’m sure the men will look great too, I mean, if any ever show up outside of the background characters (Hanokage knows we’re here to see the cute girls!). Overall, this is a good looking book, even when the visuals are showing something sinister, it still looks pretty.

In spite of this, it took me a little while to get into this manga. The characters feel a bit under-developed and Alice, in particular, feels more like an archetypical good-girl than a fully realized character. Because of this, I found the early chapters to be a bit boring, but the story starts to build up steam as it goes and I found myself getting more caught up in the secrets of this world and the conflict surrounding what should be done with the cosmofs. 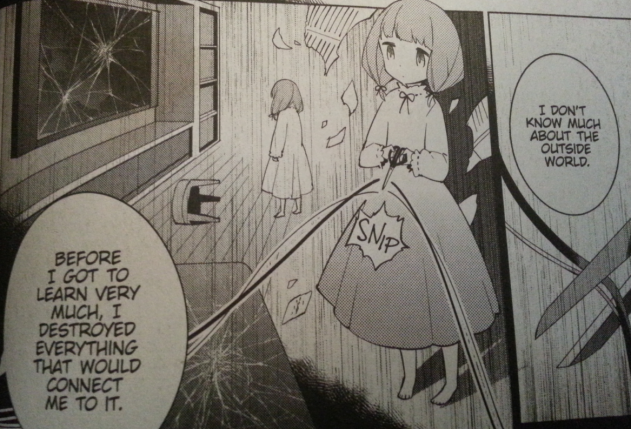 Interestingly, there aren’t any clear bad-guys in this manga. The cosmofs don’t seem to actively mean to cause harm, and it’s unlikely that Alice’s mother intended for them to go berserk, however, it becomes increasingly clear that the members of the Intergalactic Police Force have justifiable reasons for wanting them exterminated. The cosmof’s destructive behavior has caused wide-spread disruptions to society, which has ruined lives and even resulted in deaths. Alice wants to believe that her family, and the cosmofs, aren’t “bad” and that everyone has just misunderstood the situation, but she’s been cut off from the media, and everyone except the citizens of her remote village, for the past six years and is just now discovering that there is a lot about her family that she never knew. Perhaps they aren’t as blameless as she’s wanted to believe all of this time. The ambiguity of the situation is intriguing and I’m very interested to see where Alice’s search for answers will eventually lead her.

While Cosmo Familia has lovely art and a stimulating enigma at its core, it isn’t really a manga that I think is likely to blow anyone away. I did wind up enjoying it overall, however, so if you’re in the mood for a magical-girl adventure, this is a decently entertaining read.

What did you think of this manga? Any theories on why Alice’s mother disappeared? Let me know in the comments.