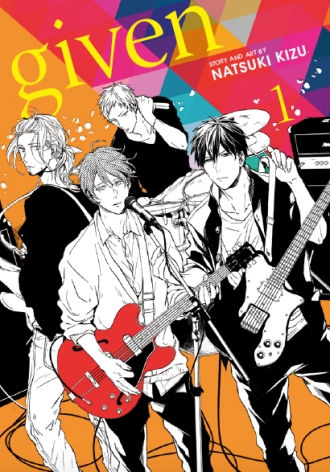 Given was by far my favourite anime to debut last year and I’ve been excitedly awaiting the release of the original manga by Natsuki Kizu, so that I could experience more of this incredible story. So, for once, I’m in a position where I’m reviewing a manga with an anime adaptation that I’ve actually watched! I definitely read far more manga than I watch anime, so the phrase “I can’t comment on how this compares to the anime” has become something of a popular refrain on this blog. This time, however, if you’re a fan of the Given anime, I can reassure you that you won’t be disappointed.

Uenoyama thought that he’d found the perfect place at school to take a nap, a secluded staircase in an area of the school where no one ever goes. Or at least he thought that no one ever went there, but that’s where he first runs into Mafuyu, a spacey boy who apparently likes to nap in the same place while clutching an expensive guitar with busted strings. Uenoyama gets on Mafuyu’s case for leaving his instrument in such poor condition and winds up replacing the strings and tuning the guitar for the other boy, much to Mafuyu’s amazement. Despite owning such an impressive instrument, Mafuyu is completely clueless about music and winds up begging Uenoyama to teach him how to play. Uenoyama has been playing guitar for years and is even a member of a band, but he’s never taught anyone else how to play, least of all a complete novice like Mafuyu. He’s eventually won over by Mafuyu’s eagerness and persistence, however, and it’s during one of their guitar lessons that Uenoyama first hears Mafuyu sing. Mafuyu’s haunting voice moves Uenoyama in a way that music hasn’t for quite some time and he begs Mafuyu to join his band, but now it’s Mafuyu’s turn to hesitate. He’s never been good at expressing himself and doesn’t know if he has what it takes to be part of a band, but Uenoyama has been inspired and is determined to perform with him. Will he be able to convince Mafuyu to give the band a chance? And what was Mafuyu doing with an expensive guitar that he didn’t know how to play or care for in the first place?

One of the strongest components of Given is its characters. As this manga is all about communication and expressing your feelings, Mafuyu and Uenoyama act as great foils for each other. Mafuyu is harbouring a lot of complex emotions inside himself, but doesn’t know how to give voice to them. Music gives him an outlet through which he can communicate the turbulent feelings he’s been struggling with and finally start to process them. Uenoyama, on the other hand, doesn’t have any troubles with expressing himself, but he’s become bored with music and has stagnated artistically since he doesn’t have anything that he needs to express. Through teaching Mafuyu to play guitar, he’s able to rediscover his passion and he becomes excited about performing and writing music again after he hears Mafuyu’s soulful singing and decides that he wants him in the band. The budding romantic feelings that Uenoyama has for Mafuyu serve as a source of inspiration for him and he is reawakened to his love of music over the course of this volume. The two of them make quite a cute pair; Mafuyu’s starry-eyed expressions whenever Uenoyama does something impressive are adorable and it’s sweet to see how the grouchy Uenoyama always ends up caving to Mafuyu, first agreeing to fix his guitar and later to teach him how to play it. They’re still not fully connecting with each other at this point in the story, but they’re interactions are very endearing and I look forward to seeing their relationship grow in future volumes. 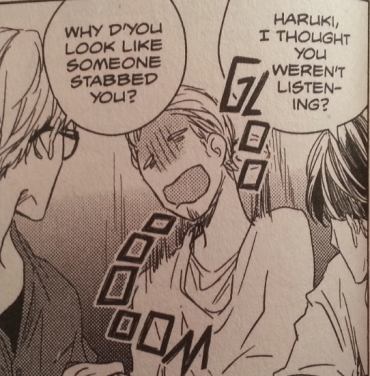 In addition to the main couple, there is also a second romantic plotline between the other two members of Uenoyama’s band, Haruki and Akihito. Haruki and Akihito are a bit older then Uenoyama and Mafuyu and attend the same college together. Haruki is responsible and kind-hearted and has a big-brotherly air about him whenever he interacts with the younger members of the band. Akihito is the band’s cool and sexy drummer and is more laid back, but he watches over Mafuyu and Uenoyama in his own way. Haruki has a huge crush on Akihito, who seems to be entirely oblivious to Haruki’s romantic interest, and it’s hilarious to watch poor Haruki’s quiet freak-outs as he tries to navigate his unrequited feelings. I often felt like these two stole the show in the Given anime and I love them both just as much in the manga. I think I’m even more invested in seeing these two get together than I am the main couple!

One minor complaint I have about the manga is that Mafuyu’s level of knowledge about music seems ridiculously low for a high school student. I understand that Mafuyu needs to be at a low starting place so that readers can learn alongside him and that different readers will have different levels of familiarity with the music industry, so it makes sense to have him be a complete novice at the start so that even readers with very little knowledge won’t feel lost. However, even taking that into account, it seems weird to me that Mafuyu wouldn’t know that a guitar string could be replaced. Even more bizarre, he apparently doesn’t know what a band is?! That one’s really stretching the bounds of believability. So much so that I wonder if this was a case of something being lost in translation? Perhaps Uenoyama was using a more obscure term for a band that we don’t have an English equivalent for? If anyone knows the answer to that, please let me know in the comments.

The Given manga is a compelling character-drama that’s hooked me just as strongly as the anime did. While the manga version is at a bit of a disadvantage when compared to its anime counterpart is some capacities, as this is a story in which music is a central focus and manga is a purely visual medium, I felt that the artwork did an excellent job of conveying the emotions that the characters were experiencing, both while playing or listening to music. I also appreciated that the manga was a bit faster paced, as I found the earlier episodes of the Given anime to be on the slow side. If you’re a fan of the anime, I whole-heartedly recommend reading the manga as well. If you’re a BL fan who somehow hasn’t heard of Given, don’t miss out on this manga! Given is a series that’s funny, poignant and thoroughly romantic. Definitely check this one out!

For more information on this manga, check out SuBLime Manga’s website: https://www.sublimemanga.com/reader/788

What did you think of this manga? Do you prefer the anime or the manga version? Let me know in the comments. You can also check out some of my other BL manga reviews: