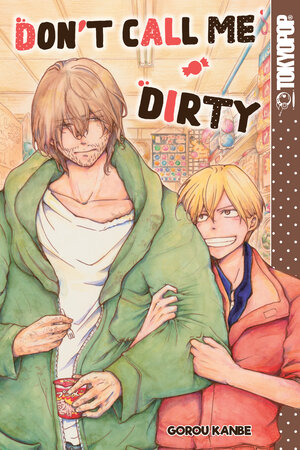 Don’t Call Me Dirty is a BL manga by Gorou Kanbe with a title that might make it sound sexier than it actually is. Instead of a being a comic about dirty deeds (though there is a bit of that), this is a touching and romantic tale that focuses on the importance of treating everyone with dignity and kindness.

Shouji’s relationship with his boyfriend is on the rocks, so he’s been trying to keep busy by throwing himself into his job at his dad’s liquor store and helping out the elderly owner of the snack shop next door, whose health has been declining. When a homeless man come’s to the snack shop to purchase some food with the loose change he’s collected off the ground, Shouji is initially flustered, but does his best to treat him like any other customer. The man tells him that his name is Hama and is very conscientious and polite during their interaction and Shouji is ashamed about his initial reaction to Hama’s dirty appearance. When he later sees Hama being wrongfully accused of shoplifting, he sticks up for him and helps clear up the misunderstanding. Hama continues to stop by the snack shop and Shouji tries to find little ways to help him. As they get to know each other better, Shouji’s feelings start to turn romantic, but Hama has been let down by the people he cared about in the past and is reluctant to get too close to Shouji. Will they be able to overcome their reservations and the judgement of their neighbours in order to find happiness together?

The story of Don’t Call Me Dirty examines what it means to be othered and the impact that it can have on the people who are being marginalized by their society. Shouji is an upbeat and outgoing young man, but he’s absorbed a lot of homophobic notions and struggles with accepting himself. He is out to his father and the other people in his life, who generally all seem to be fairly accepting and supportive, but he still thinks that the fact that he’s attracted to men is “dirty” and worries that people will think he’s gross. Shouji’s been dating a man who identifies as straight and, due to his hang-ups regarding his sexuality, he puts up with neglectful and disrespectful treatment from this boyfriend because he’s to insecure to stick up for himself in the relationship. The relationship only ends because his boyfriend eventually breaks-up with him, leaving Shouji heartbroken. But the fact that Shouji feels like an outsider is what allows him to feel empathy for Hama, who is more openly ostracised by the people of their neighbourhood. Passerby’s whisper about Hama behind his back and people are openly rude and clearly don’t want him around; not because Hama ever does anything to warrant this treatment, but because his presence makes them uncomfortable. Shouji’s own experience with being on the other side of prejudice allows him to look past appearances and see Hama for the good person that he is. Their romance is very heartwarming, as they each help the other to overcome the emotional wounds they’ve sustained and to move forward.

In addition to being a sweet love story, Don’t Call Me Dirty also focuses on the impact that community can have in a person’s life. When Shouji is dumped by his boyfriend, a lot of the people in the neighbourhood offer him words of encouragement and this helps to lift his spirits. Shouji in turn helps to support others in the community and devotedly looks after Old Man Kaji, the proprietor of the Snack Shop, who spends most of the day sleeping and can’t manage the store without help. Conversely, a lack of a support network is a large factor in why Hama has wound up homeless. He had made the mistake of taking out a loan from a shady company that proceeded to charge him outrageous interest rates and, when Hama wound up losing everything, none of his friends stood by him. This demonstrates how truly easy it can be to become homeless if you don’t have people in your life whom you can rely on when you mess up or experience a rash of bad luck. One poor financial decision was all it took for Hama to be dragged down until he couldn’t stay afloat any longer. Community is truly a precious thing and this manga shows how important it is for us all to look out for one another.

I found this manga to be very heartfelt and lovely, however, if you asked me if the story had any flaws, I’d have to say that most of the problems, outside of the romantic drama, are resolved extremely easily. Old Man Kaji’s declining health, and the possibility that the Snack Shop would need to be closed, was a major plot point that a lot of the characters were upset about. Fortunately, a deus ex machina incident occurs towards the end of the book that results in the old man making a miraculous recovery, so no one needs to worry about losing their favourite place to hang out. Meanwhile, Old Man Kaji’s son, who is a lawyer and friends with Shouji’s dad, is able to clear up the legal troubles that Hama was in and help him get back on his feet. Then he winds up helping all of the other homeless people in the neighbourhood, because apparently their situations were all similar to Hama’s. This is certainly a very happy outcome, but it’s a little too convenient. In real life there are a variety of factors that contribute to homelessness and poverty, some of which wouldn’t be so simple to resolve and would require more than the efforts of a single person to fix. But while this might not be an entirely realistic outcome, I did appreciate the message that the manga seemed to be trying to convey; that there are things that can be done to help the less fortunate members of our communities, if people are willing to make the effort instead of ignoring the problem.

Don’t Call Me Dirty is a sincere story about the importance of showing empathy for others and I really enjoyed this adorable romance. While some of the solutions to the problems in the story wind up feeling a tad contrived, this didn’t have a huge impact on my enjoyment of the manga, as I’m a huge sucker for a happy ending. I’d recommend Don’t Call Me Dirty to BL fans looking for a feel-good read and I personally plan to pick up the spin off title: Don’t Call Me Daddy, which focuses on the relationship between Shouji’s dad and his lawyer friend.

For more information on this manga, visit Tokyopop’s website: https://www.tokyopop.com/book-catalogue-new-titles/dont-call-me-dirty

What did you think of this manga? Let me know in the comments.

Please check out my review of the sequel:

Also, be sure to check out some of my other BL manga reviews: