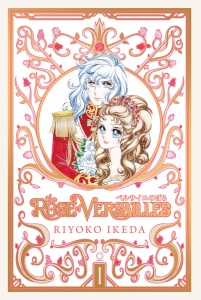 Penned by Riyoko Ikeda and beginning publication in 1972, the manga series The Rose of Versailles was a sensationally successful period-drama that’s had a huge and lasting impact on the landscape of shojo manga since its release. The story has been adapted into a hit anime, as well as several movies and musicals, and now the original manga is finally being made available to English readers. Having seen its influence in a number of anime and manga over the years, I was eager to finally read this seminal work of shojo manga and see if it lived up to all of the praise.

The beautiful, yet artless, Grand Duchess Marie Antoinette of Austria marries the Dauphin of France at the young age of fourteen and must try her best to and navigate the complex intrigues of the court of France. She meets and befriends Oscar Francois de Jarjeyes, a noblewoman who was raised as a man so that she could act as her father’s heir. The dashing and noble Oscar vows to protect the young and naïve Marie Antoinette, but this becomes increasingly difficult as unrest grows amongst the impoverished populace and Marie Antoinette proves herself to be ill-suited for the responsibilities of being Queen of France. 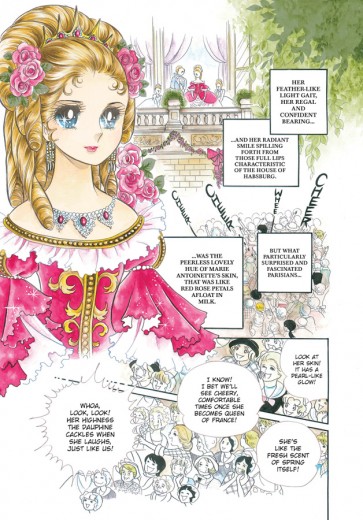 The Rose of Versailles has a very recognizable, 70’s shojo aesthetic; the young ladies all have large, shimmering eyes and everyone acts in a very theatrical manner, with big emotional reactions and lots of hand gestures whenever something of significance occurs. Some might dismiss this art style as old fashioned, but it perfectly suites the melodrama and romanticism of this story. The attention to detail in the costumes is impressive, with Marie Antoinette and the ladies of the court of Versailles all adorned in stunning and varied dresses and intricate hairstyles. But the art can also turn surprisingly slapstick during the humorous scenes or unflinchingly gruesome during the scenes that depict King Louis XV’s death from smallpox, proving that Riyoko Ikeda is a truly versatile artist. 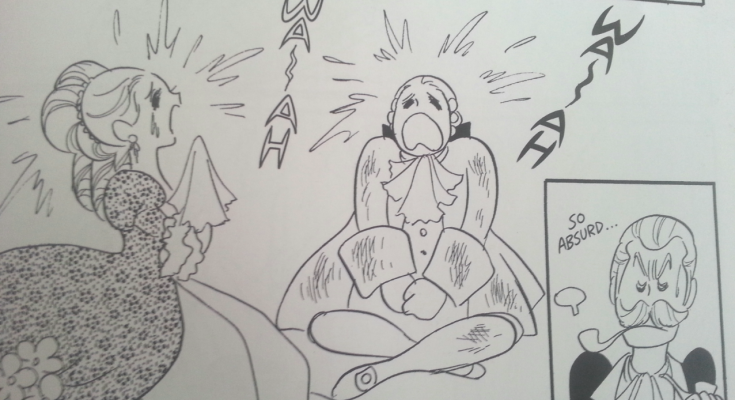 As the story is based in the real history of France, a dark cloud hangs over The Rose of Versailles, since anyone with even a passing knowledge of French history knows how this story is going to end. Even if you weren’t familiar with the ultimate fate of Marie Antoinette, the manga foreshadows the coming events of the French Revolution heavily and frequently, so there is a constant sense of foreboding. Knowing the ending ahead of time doesn’t render the story any less exciting though. Instead, this foreknowledge lends a constant source of tension to the characters actions. I found myself completely engrossed in the intricacies of the court and the conniving schemes of the various lords and ladies seeking to gain greater wealth and influence. As our heroine thoughtlessly spends money to ease her boredom and is gullibly influenced by courtiers who seek to use her, my unease for her inevitable fate just grew more and more. 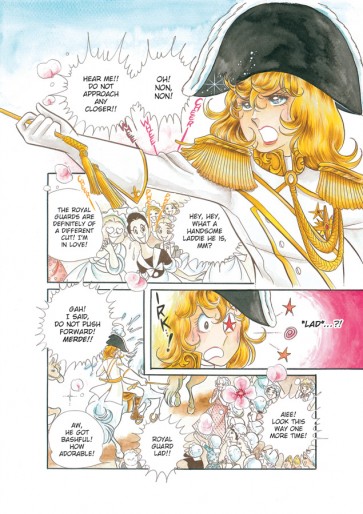 In addition to Marie Antoinette, this manga focuses on several original characters, the most famous of which is Oscar Francois de Jarjeyes. Coming from a house with a long history of military service, Oscar climbs the ranks and becomes a Commander of the Queen’s Guard, despite the fact that it is commonly known at court that she is female. Either Oscar’s family had enough influence that everyone decided to go along with her father’s insistence that she be treated as a man, or Oscar herself was simply popular enough that most people were happy to let her do whatever she wanted. Oscar’s non-conformity to the expected gender roles of the time period allows for Ikeda to explore some interesting ideas related to gender and sexuality. Oscar has an androgynous appearance and, though she is completely comfortable with dressing and acting as a man, she does self-identify as a woman, it’s simply that dressing in pants instead of dresses and practicing sword fighting instead of dancing are what’s normal to her. It’s easy to see how this character became so beloved; her easy confidence and self-assuredness as she breaks all conventions of how women were expected to behave is really satisfying to watch. It’s no wonder so many ladies in this manga fall in love with her!

The Rose of Versailles is an engaging, historical drama that is well-deserving of its status as a classic of shojo manga. The art is beautiful, the characters memorable and the twists and turns of the plot had me riveted, despite knowing that we’re marching towards disaster. Udon Entertainment is releasing The Rose of Versailles in lovely, hardcover omnibus editions, which feature shiny metallic detailing on the covers, high-quality paper and plenty of colour pages. They’re a bit pricey, but I assure you that this series is well worth the investment.

For more information on this series check out Udon Entertainment’s website: http://www.udonentertainment.com/blog/news/rose-of-versailles-volume-1-pre-order-available

What did you think of this manga? What other older manga do you consider to be must reads? Let me know in the comments! You can also check out some of my other shojo manga reviews:

6 thoughts on “The Rose of Versailles Vol 1 Review”