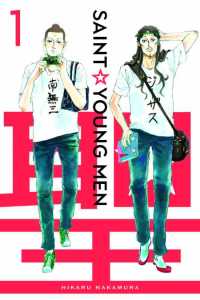 Have you ever wondered what it would be like if Buddha and Jesus were to meet? Well, turns out they would be best friends and it would be great!

After safely ushering the world into the new century, Jesus and Buddha decide to take a well-deserved vacation. The two of them get an apartment in Tokyo so that they can experience mortal life in the modern world and they proceed to go on a series of everyday adventures together.

Saint Young Men is a fantastic buddy comedy! Each chapter follows the carefree Jesus and the more serious and thrifty Buddha on a different slice-of-life style escapade. They attend festivals, go shopping or just try to take public transit and hilarious hijinks inevitably ensue. The pair is trying to keep a low profile, but that turns out to be nearly impossible, as they accidently cause miracles on a regular basis and have been mistaken for members of the yakuza. Thanks to their virtuousness, animals seem to instinctively recognize them and are constantly following them around or trying to help them, in what is probably my favourite ongoing joke in the series. On more than one occasion a considerate animal tries to sacrifice itself in order to provide them with food, much to Jesus and Buddha’s horror! It’s a really funny series, with each chapter building off of the jokes and information established in previous chapters, so the comedy just improves as it goes rather than becoming tired or stale.

I’m not a very religious person, so I might not be the best judge of whether or not the humour in Saint Young Men could be considered to be disrespectful of the Christian or Buddhist faiths, but I personally didn’t feel like the manga ever crossed the line into being derisive of either religion. The humour is mostly situational rather than satirical and, while it certainly isn’t a serious work, it didn’t come across to me as being mean-spirited. Not everyone will necessarily feel the same way but, for my part, I actually wound up learning a few things about both Christianity and Buddhism, thanks to the abundant notes included at the end of each chapter to help explain all of the religious references.

Saint Young Men is a funny and light-hearted read about a pair of good friends just enjoying everyday life and trying not to accidently start levitating. This release collects the first two volumes of the manga in a lovely, hard-cover omnibus that includes colour pages, copious translation notes and a forward by the Research Director of the Sainsbury Institute for the Study of Japanese Arts and Cultures (London & Norwich). It’s a beautiful looking book and, I’d say, it’s well worth the cost. I would highly recommend this series to anyone who’s looking for a fresh new comedy to enjoy.

For more information on this manga check out Kodansha Comic’s website: https://kodanshacomics.com/series/saint-young-men-hardcover/