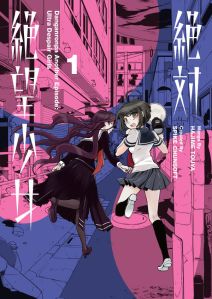 I don’t typically read a ton of horror manga, as it’s just not a genre that I tend to enjoy very much. There are a few exceptions though, usually for series where elements of other genres are mixed into the story. Enter Danganronpa! Originally a video game series, the Danganronpa franchise has expanded into anime and manga and this bizarre mashup of horror and mystery drew me in with it’s over-the-top characters and enticing intrigue. Seeing as it’s the month of October, now seemed like the perfect time to give one of its spinoff series a try.

Komaru Naegi has been held captive in an apartment for over a year, with no idea what her kidnappers want or what has become of her family in the interim. She finally manages to escape, only to find that the surrounding city is under attack by an army of Monokumas! These deadly robot bears are controlled by a group of deranged children who call themselves the Warriors of Hope and who want to create a paradise with no adults. Komaru receives help from a group known as the Future Foundation, but even with their aid she ends up captured by the psychopathic children and forced to participate in a deadly game, where they hunt down and murder adults for sport. Just when all seems lost, a strange girl by the name of Toko Fukawa shows up wielding a pair of scissors as weapons and comes to her rescue. Now, the two of them must try to escape this city together. Komaru is relieved to have such a formidable ally, but it turns out the Toko has a split personality and that her other personality is the famous serial killer known as Genocide Jill! Toko claims that she has her other personality under control now, but will she be able to keep it together and work with Komaru long enough for them to make it out of this nightmare alive?

Taking place in-between the events of Danganronpa: The Animation (this is the name of the first manga series, so titled because it is an adaptation of the anime) and Danganronpa 2: Goodbye Despair, Ultra Despair Girls has a bit of a different feel from the other entries in the franchise. The two afore mentioned series featured groups of teenagers forced into playing a type of killing game. They were trapped in a specific location and the only way to escape was for a character to murder one of their fellow captives and then get away with the crime. The other teens would investigate the murder and then try to decide who the culprit is during a trial. If they pick the wrong person, the murderer gets to escape while the rest of the group dies. If they pick the correct person, the murderer is killed while the rest get to live another day. There was a heavy focus put on the group searching for clues and trying to deduce the real killer, making these stories more like murder mysteries than straight up horror manga. Ultra Despair Girls, on the other hand, is more of a horror/survival tale, with our heroes running around the city trying to avoid detection and come up with a plan to outwit their tormentors and get away. This shift in the style of narrative is likely a result of the fact that the game this manga is based on was a third-person shooter, as opposed to the other games in the series which feature gameplay more akin to visual novels and adventure style games. Despite its differences from the other titles in the series, Ultra Despair Girls still features Danganronpa’s trademark elements of shocking violence juxtaposed against twisted humor and cartoonishly wacky characters, so I still enjoyed it quite a bit. If you have a low tolerance for gore, this title does feature a lot of blood and some creepy imagery, but it isn’t overly graphic. As I mentioned at the top, I don’t read a lot of horror, but I found that I had no problem with reading this book.

Fans of the Danganronpa series likely recognized Toko as one of the central characters from the first manga series. She makes a reappearance in Ultra Despair Girls, and I have to say that I like her character significantly more here than I did in the original series. I find that the concept of a split personality is an overused trope in fiction, and one that I rarely find interesting, and I recall that the reveal of her other personality felt like it come out of nowhere in the first series. Toko is also hard to like, as her normal personality is abrasive, and her Genocide Jill personality is a freak. This made her one of the most annoying weirdos amongst a group of other total weirdos. In Ultra Despair Girls, however, she is playing opposite the extremely normal Komaru, who is just so happy to have someone to talk to, after being isolated for so long, that she is eager to be friends with Toko, despite her eccentricities. This dynamic is way more fun than the one Toko had with the previous cast of characters. I’m also expecting that her claim to have her Genocide Jill personality under control will be tested before the series concludes, which adds a sense of tension to her relationship with Komaru. Can Komaru really trust her? We’ll have to read on to find out!

If you’re a fan of the Danganronpa series, you will likely really enjoy Ultra Despair Girls. Toko isn’t the only character from other parts of the series who makes an appearance and Komaru is actually the sister of the protagonist from the first manga series. I personally liked learning what had become of some of these characters and seeing more of the Danganronpa world. On the other hand, if you’re new to the franchise, I don’t think I would recommend this manga as a jumping on point. In addition to featuring or referencing previously established characters, some of the background information provided in this manga spoils a major plot point from the first series. I’d recommend reading Danganronpa: The Animation first and then checking out this series afterwards.

For more information on this series, check out Dark Horse’s website: https://www.darkhorse.com/Books/3003-663/Danganronpa-Another-Episode-Ultra-Despair-Girls-Volume-1-TPB.

What did you think of this manga? Have you read any of the other Danganronpa manga series or played any of the games? Let me know in the comments!