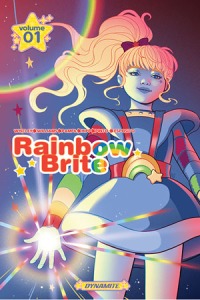 Oh man, was I excited when I spotted this book at my local comic book store! Rainbow Brite is a character that was created by Hallmark in 1983 and she stared in an animated cartoon of the same name that I loved as a child. Despite consisting of only one season and a single movie, this cartoon was a big part of my youth and I remember renting VHS copies of the episodes again and again; to the point that it would have saved my parents a ton of money if they had had the foresight to just buy them for me. I’m absolutely thrilled to see that Rainbow Brite is getting fresh life with this new comic from Dynamite Entertainment. But, did this new take on my beloved girlhood hero live up to my expectations?

Wisp is an energetic girl who loves make-believing that she is the hero of a fantasy adventure with her imaginative best friend, Willow. One night, she is attacked by shadowy monsters that are trying to steal the colours from her world. While attempting to get away she is helped by Twinkle (or Twink), a Sprite who transports her to Rainbow Land, the source of all the colours in the universe! Rainbow Land is being taken over by the evil King of Shadows, who is draining its colours and transforming it into a wasteland. The Sprites have been summoning children from across the universe to take up the mantles of Colour Guards and fight back, but, so far, their rebellion has been going poorly and almost all the Colour Guards have been captured. Twink thinks that Wisp will be able to turn the tide in this battle, as he believes her to be the legendary hero capable of wielding the powers of all the colours and creating white light: Rainbow Brite!

Fellow fans of the Rainbow Brite cartoon might recognize aspects of this setup from the two-part special “The Beginning of Rainbowland”, but, while the comic pays homage to Rainbow Brite’s original origin story, it’s not afraid to put its own spin on things and it’s clear that a lot of thought was put into building a world and magic-system based around colours and light. Sprites from the non-visible light spectrum are introduced and Twink’s role as the only white Sprite is explored, making Rainbow Land feel much mo

re fleshed out. Probably the most ingenious addition to the Rainbow Brite lore would be the Star Scepter: a magical item Wisp needs to find, along with the Rainbow Belt. When she holds the Star Scepter, Wisp transforms into Rainbow Brite in a sequence that could have come straight out of a magical girl anime. As Wisp finds different colour power prisms throughout Rainbow Land she is able to use then to power up the scepter and gain a different ability and transformation outfit. So far, the red power prism grants her super speed and a roller derby inspired outfit to zip around in. Having Wisp collect powers over the course of her adventure is a great hook! I’m already trying to guess what each colour power prism will do and looking forward to seeing the other outfits she’ll get. It’s also much more satisfying to see Wisp work for her powers and get stronger gradually, rather than just having all her abilities from the get-go.

As a character, Wisp is a fun and interesting lead. She’s a little unsure of herself, but she is willing to do whatever she can to help her new friends and will run headfirst into a fight if she thinks that’s what needs to be done. She remains uncertain about this whole magical destiny thing and seems to be struggling with some events in her past that, thus far, have only been hinted at through some off-hand comments about not liking bullies. I’m sure we’ll see her grow in confidence, as well as power, over the course of the series and I’m looking forward to it. 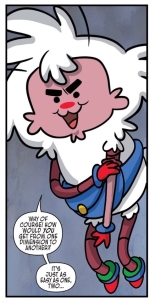 A good number of fan-favorite characters from the old show make appearances in this comic, including: Murky and Lurky and Starlite, the most magnificent horse in the universe! All the characters have received a redesign, though Rainbow Brite and Starlite look very close to their original appearances. So far, I think Red Flare, the Red Colour Guard, has the best new design, but I was pretty happy with all of them. My one complaint is that I think the rounder look of the Sprites from the cartoon was way cuter than the space monkey design they have now. On the plus side, however, they at least look more distinct from each other now, as opposed to looking the exact same but with different colours. There are also some new characters joining the cast, such as Wisp’s friend Willow, who seems more intellectual and has a really cute dynamic with Wisp. Unfortunately, we didn’t get to see a lot of her in this volume, but it seems like she’ll play a bigger role in future releases.

Rainbow Brite is a remake that does exactly what I want a new version of a story to do. It retains those aspects of the original that were appealing and fun and then builds upon them in a way that takes the property to exciting new places. I’d say that reading this comic was like reliving my childhood, but, in all honesty, this was better than that. Looking back at the old cartoon for this review, I could recognize the things about the show that originally drew me to this bright and colourful world, but I was also acutely aware of its shortcomings. That’s why I’m so happy that this comic exists. The characters have been given more depth and the world of Rainbow Land feels much more fully realized. While reading this book, I felt like I was finally getting the epic version of Rainbow Brite that I had built the show up to be in my head as girl. I definitely would recommend it to anyone who loved or still loves the old Rainbow Brite cartoon, but I think it would also appeal to shojo manga fans or anyone who enjoys a good all-ages fantasy adventure. Rainbow Brite has it all: action, humour and a likeable cast of characters. A great read for children and adults alike!

What did you think of this comic? Do you feel it did a good job adapting the source material? Be sure to let me know in the comments!

Also be sure to check out some of my other kids’ comics reviews: