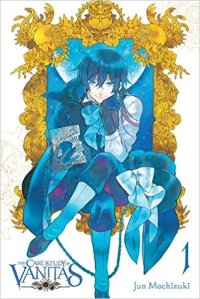 ‘The Case Study of Vanitas’ is the newest manga by Jun Mochizuki, the mangaka behind the hit series ‘Pandora Hearts’. Being a fan of that series I was interested in seeing what this new story was all about. The cover of this manga tempted me with promises of more lovely steam punk fantasy adventures and the description of the book seemed to hint at an exciting tale involving two male leads, who would develop a close relationship over the course of the story that would tease it’s readers with hopes that it might develop into something romantic, but then never actually deliver on that. Of course, I was intrigued.

The story begins with our hero, Noé, traveling to Paris on an airship, when he encounters a young lady who seems to be ill. This girl turns out to actually be a vampire who has been infected with some kind of magical malady that is rumored to be caused by a special book that was created by an outcast Vampire by the name of Vanitas. At this point a mysterious character breaks into the ship, seemingly in pursuit of the vampire maiden. Noé tries to intervene and protect the girl, revealing himself to also be a vampire in the process. But the mystery man turns out to actually be trying to cure the girl, using the book of Vanitas from the legend! Noé wants to learn the truth about the book and ends up joining forces with the weird man who calls himself a vampire doctor and claims to have inherited both the book and the name of Vanitas from the original vampire from the legend.

Jun Mochizuki is great at drawing fun characters that play off of each other in amusing ways. I immediately liked Noé and I love his interactions with the other characters. Noé comes off as being serious most of the time but he is a touch naïve and occasionally lets his emotions get the better of him, and these outbursts are often hilarious. Also, he has a cute cat named Murr!

Vanitas, on the other hand,  is a more dramatic, out-there and, frankly, unbalanced character. Vanitas seems to say whatever is on his mind and easily gets carried away when he gets an idea into his head. At times this is funny, but he can also come off as a real creep. At one point in the story he suddenly decides that he is in love with a female character that had been fighting our leads moments earlier. Upon this revelation, Vanitas decides to forcibly kiss her in a scene that is pretty uncomfortable, especially considering our ‘heroes’ were holding one of her comrades hostage at the time. I’m not sure if this was intended to be funny or if the mangaka was trying to show us that Vanitas is a huge jerk. If it was the later, I guess mission accomplished. I wouldn’t say that this scene ruined my enjoyment of the book, but it definitely soured my opinion of Vanitas’ character. Perhaps this was intentional on the authors part, as there is a lot of mystery surrounding Vanitas and how he came to acquire the book and his name, and I’m not sure if we are meant to trust that this unstable individual is an entirely good person. I guess I will need to wait and see where this goes in future volumes.

The art in this series is beautiful! The steampunk inspired period costumes all look great and designs of the airship and backgrounds are lovely. I think that the characters are where Jun Mochizuki’s art really shines (some of their expressions are just adorable), but she is good at drawing entertaining action scenes as well. I laughed out loud at a couple of parts during the fights and I found it easy to follow what was going on.

Overall this was a fun read with plenty of laughs, action and intrigue. I can’t say I was sold on every aspect of the manga, as I mentioned I’m not sure how much I’m going to like Vanitas, but I did really like our main character Noé, and there is plenty of mystery surrounding both our main leads backstories that has me interested in reading more. I imagine I’ll be picking up volume two, when it comes out.