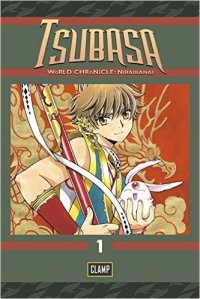 ‘Tsubasa Reservoir Chronicle’ is probably my favorite series by CLAMP (or maybe xxxHolic, it depends on the day), so when I heard that it was getting a continuation I was psyched! Even if it meant that another of my favorite CLAMP series needed to be put on hiatus while they worked on this… Again… *Sigh*

‘Tsubasa World Chronicle’ begins not too long after the end of Reservoir Chronicle. Syaoran, Kurogane, Fai and Mokona are continuing on their journey and have landed in a new country called Nirai Kanai. This world seems peaceful and idyllic, but before long the gang discovers that there is darkness lurking at the edges of this kingdom and they are quickly roped into helping out. But things get complicated when Syaoran starts seeing things the others can’t. What’s more, he’s having mysterious dreams about the other Syaoran! Is there a chance that the two can be reunited?

So did this new story hold up to the high expectations that I had, going in as a fan of the original? As a continuation, this series delivered on almost all of what I wanted from it! It’s great to see Syaoran, Kurogane, Fai and, of course, Mokona, hanging out and going on more adventures together. The relationships that were built over the course of Reservoir Chronicles really shine through here. I found it really heart warming to see Mokona’s playful teasing of Kurogane and to see Kurogane and Fai acting like Syaoran’s worried parents! I really love these characters and I’m glad to get the chance to see their journey continue. What’s more World Chronicle continues the tradition of crossing over with xxxHolic, so we get to see Watanuki from xxxHolic Rei too! As with Reservoir Chronicle, there are also alternate versions of characters from other CLAMP series that make an appearance. This includes Kujaku from RG Veda and several of the main characters from Gate 7. Which is pretty fun to see, since Gate 7 has also gone on hiatus… *Sigh*

The art, as usual, is fantastic. The character designs look great, with the gang getting new costumes for the new kingdom. The action scenes are easy to follow and the dramatic moments pack a powerful emotional punch, thanks to the wonderful expressions on the characters faces.

If you’re a fan of the original series then this is a must read! If you haven’t read ‘Tsubasa Reservoir Chronicle’ then I definitely suggest that you start there. I also recommend that you read xxxHolic and xxxHolic Rei in order to better understand the crossover components. They’re great series too!